Media Arts @ York presents How in the World to Carmen Sandiego: Making an Interactive Special

Join Emmy-nominated director Jos Humphrey as he takes us through the creation of Netflix’s interactive animated special Carmen Sandiego: To Steal or Not to Steal.

Carmen Sandiego debuted in 1985 with the first of twenty-two video games, and went on to become a best-selling game franchise through the ’80s and ’90s. Three TV shows followed, winning six Emmys and building the mysterious globetrotting thief into an iconic heroine.

Carmen made a dramatic return in 2019 with a new series streaming on Netflix featuring the titular character and her tech-whiz sidekick, Player. This fresh take presents an intimate look into Carmen’s past where viewers not only follow her escapades but also learn who in the world is Carmen Sandiego and why she became a super thief.

In March 2020, Netflix followed up its Black Mirror: Bandersnatch interactive special with Carmen Sandiego: To Steal or Not To Steal: “Don a disguise or fly away? Stick to the plan or go rogue? Carmen’s on a mission — and she needs your help. You drive the action in this interactive adventure, helping Carmen save Ivy and Zack when V.I.L.E. captures them during a heist in Shanghai.”

Jos Humphrey is one of the directors on Netflix’s Carmen Sandiego, which received 2020 Emmy nominations for Best Directing for an Animated Program and Best Special Class Animated Program. From primitive pencil-and-paper beginnings in classical animation, his 20-year career has included animating, storyboarding, writing and directing on numerous award-winning TV series and a theatrical feature. 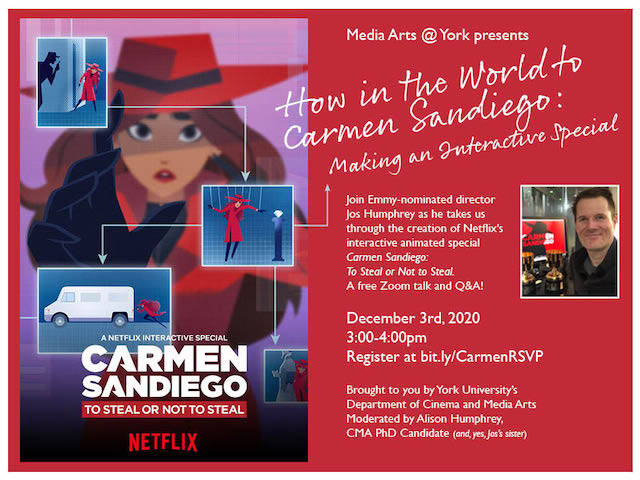