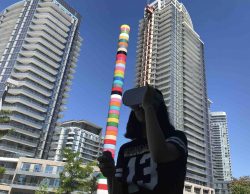 If you were unable to attend the November 5, 2019 Toasterlab Mixed Reality Performance Symposium at York University you can now view recordings of live webcast presentations and panel discussions here.

The Mixed Reality Performance Symposium: York is the first of six symposiums hosted by mixed reality producers Toasterlab, and will explore extended and mixed reality performance. Artists and new media creators will share modes of working and recent successes in VR, AR, and immersive theatre.

Funded by the Canada Council for the Arts, Toasterlab’s Mixed Reality Performance Atelier is a two-year deep dive into the current mixed reality methods used by theatre and performance makers across Canada and the U.S. Every four months, an Atelier cohort will present progress on their projects at a symposium hosted by Toasterlab in partnership with a university and the Atelier’s advisory board. When the Atelier concludes in June 2021, Toasterlab will share open source tools, guidelines, and instructional material for the creation of immersive media in an arts context.

Toasterlab creates place-based extended reality experiences that promote deeper engagement with history, community, and imagination. Toasterlab combines expertise in storytelling, theatrical and media production, and the development of new technology to produce both original work and partnerships. Our work ranges from live site-specific live performance to bespoke mobile applications and VR films, and often combines a variety of approaches to collapse time and space for the delivery of impactful narratives. From the largest festivals to community youth workshops, we build accessible ways to understand places in whole new ways.

Canada Council for the Arts