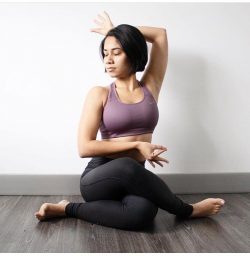 Themed yoga classes to help you stay active and healthy in body and mind. Don’t forget to bring a water bottle and yoga mat! 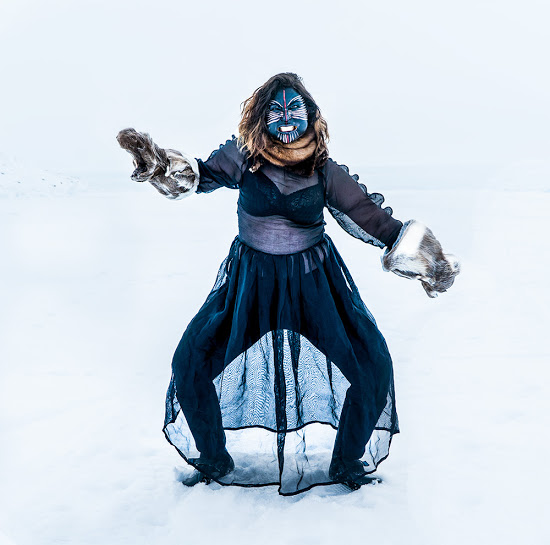 When the exhibit Tunirrusiangit:Kenojuak Ashevak and Tim Pitsiulak opened in the Sam & Ayala Pavilion it was one of the largest showcases of Inuit artwork at the Art Gallery of Ontario (AGO). it could be seen as a singular sound that started a continuing harmony and one that echoes here within these walls of the Joan Goldfarb Study Centre.

Curated by Jocelyn Piirainen, echoes features “Silaup Putunga” and “Inuit in the Media” that relate to the idea of an echo and to ‘nipi’ – the Inuktitut word that best describes sounds as understood in the English language.  Commissioned within the context of Tunirrusiangit, they were created by Laakkuluk Williamson Bathory & Jamie Griffiths and Taqralik Partridge as responses to the artwork of Inuit artists Kenojuak Ashevak and Tim Pitsiulak.

The Goldfarb Study Centre exhibition ECHOES and the screening of THE 5th REGION  documentary are presented at York University by MOBILIZING INUIT CULTURAL HERITAGE (MICH), a six-year SSHRC Partnership Grant focusing on the contribution of Inuit visual culture, art, and performance to Inuit language preservation, social well-being, and cultural identity. MICH is based at the Robarts Centre for Canadian Studies and Anna Hudson, Professor/AMPD is the Principal Investigator 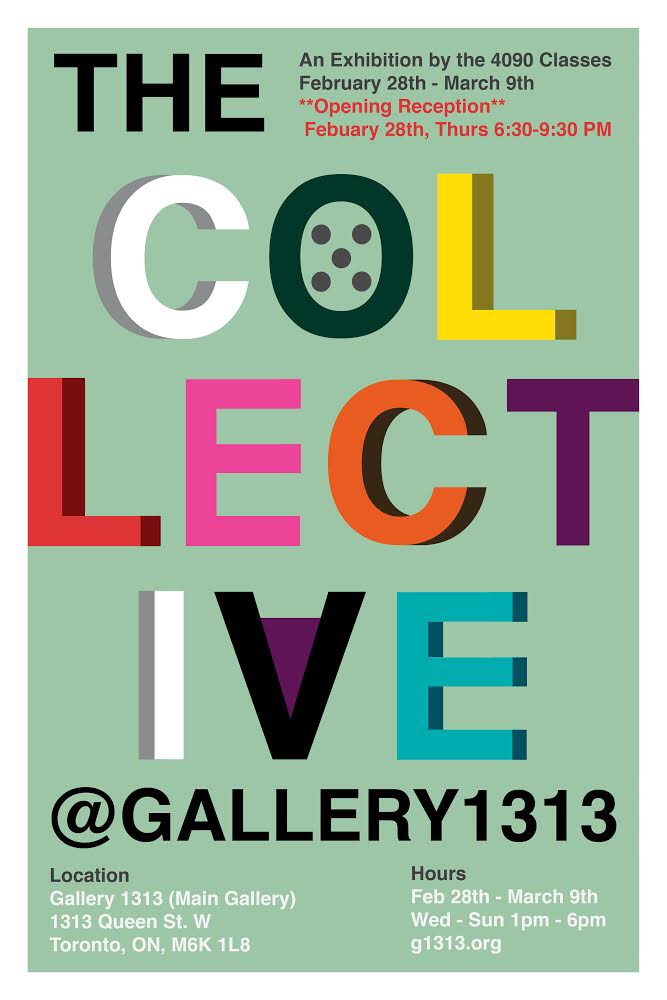 Featuring the works of the students in the 4090 painting and installation classes, “The Collective” focuses on the exploration of contemporary questions and concerns regarding the body, the environment, urbanity, and cross-cultural overlays.

A space for experimentation and new discoveries, “The Collective” invites you to ask critical questions of the art and of yourself and open up to a collection of work that is both completely unique and yet wholly connected. “The Collective” is hosted in the Gallery 1313 Main Gallery, February 28th- March 9th.

Our March edition of Winter’s cafe is here!
Drop in for hot cocoa, snacks. Come hang out and feel the Winters love!

“To Live as if It Matter[s]: What Critical Indigenous Theory Taught be About Studying Music”

This lecture considered what is means – as a settler scholar – to engage in an ethics of responsiveness to Indigenous thinkers and communities. How might critical Indigenous theory shape approaches to studying music? And how might music scholarship and performance enact Decolonial practices that support Indigenous insurgence? These questions will be addressed using seven, interconnected reflections, coupled with listening examples that merge theory and performance.

4:00-5:30pm: Discussion, please contact Sherry Johnson (sherryj@yorku.ca) for the article to read if you wish to take part in the discussion 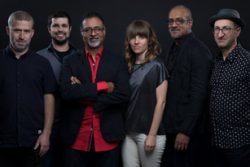 Avaatar is the brainchild of Toronto saxophonist and composer, Sundar Viswanathan, a refined and seasoned blend of some key musical interests and elements, including classical Indian music, modern jazz, Brazilian lyricism, atmospheric textures and ambiance, Javanese gamelan, and contemporary improvisation. Avataar was a recipient of the 2016 TD Special Projects Award from the Toronto Jazz Festival, and is continuing its development with its first international tour, in South Africa, the same month as their performance in Guelph. The superb band lineup features internationally recognized players, with numerous Juno and other notable awards to their names: Michael Occhipinti (guitar), Justin Gray (bass and bass veena), Ravi Naimpally (tablas and percussion), and Max Senitt (drums).

Each show is presented by a production company formed by a student ensemble within Devised Theatre.

The four shows are dead skin, a grotesque and physical exploration of the darkness within by Four Eyes Collective; #Filters, which challenges the way we connect on a daily basis by Transcendence Theatre; Refraction, a supernatural thriller where a woman is confronted by her past by Catapulse Collective; and After George, a revealing drama which plays out inside a high school anniversary reunion by Atomic Oddity Productions.

Venue:  Begin in the Festival Lounge space in  Accolade East Building room 209 to sign in, shows will take place in ACE 207.

Admission: Pay What You Can. Suggested $10. 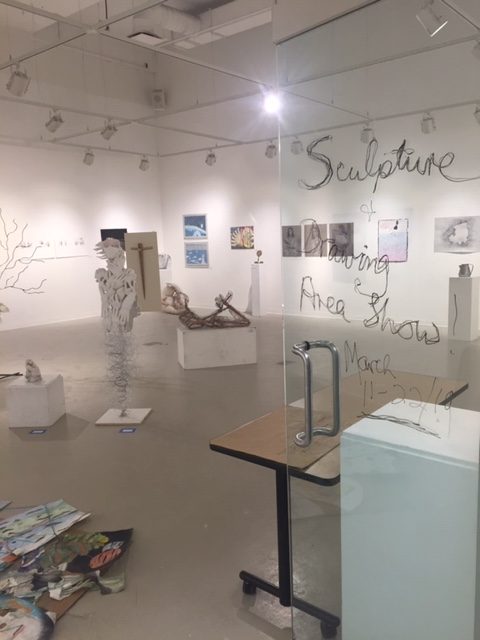 A group show featuring sculpture and drawings by upper-level students in the Department of Visual Art & Art History. 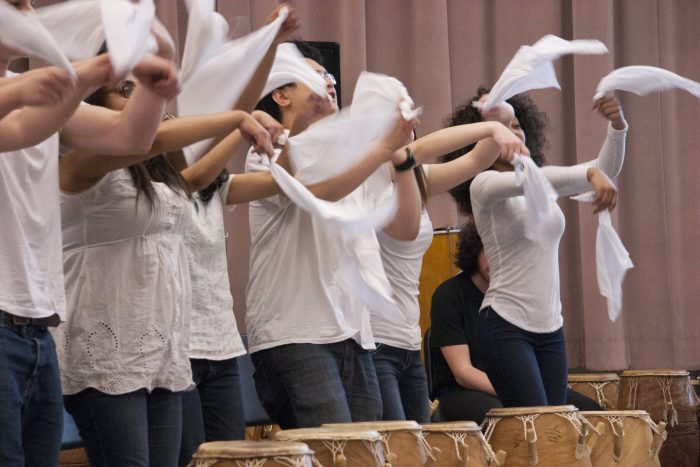 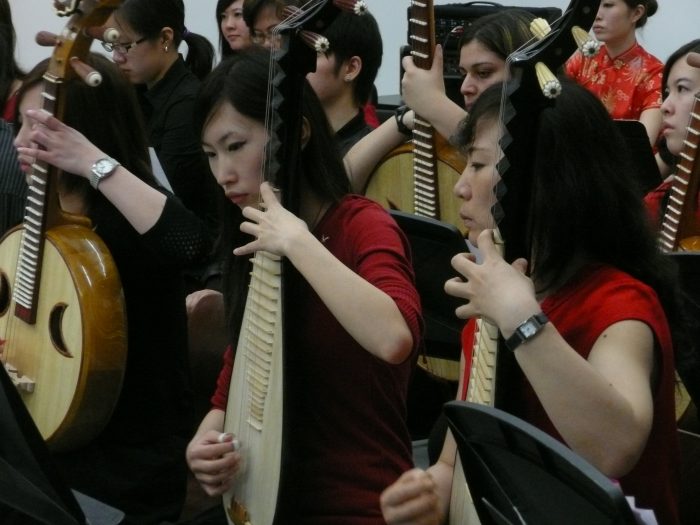 Aqua the singer, songwriter, storyteller, artist, and activist is a strong Anishinaabe Kwe~Indigenous Woman, also known as Nibii Waawaaskone~Water Flower. She originates from North Bay where she was raised by her single Mom Waabishkaasin Kwe~White Stone Woman. Aqua is a two-spirit woman of mixed Ancestry; Ojibwe Métis with French and Scottish
heritage. 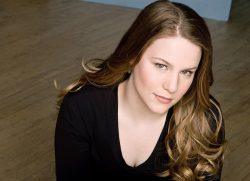 Aqua has created a life filled with her love of creation. She is a hand drummer and hand drum maker and has shared her joy for drumming with the community in circles all over the country. During her tour of western Canada visiting many remote reserve communities and sharing her passion for storytelling, Aqua began writing her own stories and turned them into songs with the
help of her hand drum. She then self-produced and released her EP Spirit Music with four tracks to honour the four directions and all aspects of creation encompassed on the medicine wheel. Soon she was signed to Tribal Spirit Music where she co-produced her album Hand Drum Stories with thirteen tracks to honour the thirteen grandmother moons.

Aqua is committed to sharing Indigenous stories through theatre and is grateful to have had the opportunity to study Theatre Arts at Algonquin and Film at Humber where she received the Board of Governors Award for her dedication to her community and the performing arts . She understands the importance of gathering as a community to share stories and has learned that
a beautiful way to bring people together is through live performance. Aqua co-created and collaborated with Cow Over The Moon and other gifted Indigenous artists on a children’s theatre piece to share the creation story of Turtle Island~North America. She composed original music to score the teachings and bring to life our traditions as Indigenous People.

Aqua is currently working on her next album while collaborating with other like-minded artists who want to share their story, their struggle, their truth. She is an advocate for anyone who has endured violence and adversity. She provides a safe space in her sacred circles so the community can grow together, stronger, forever as a whole. 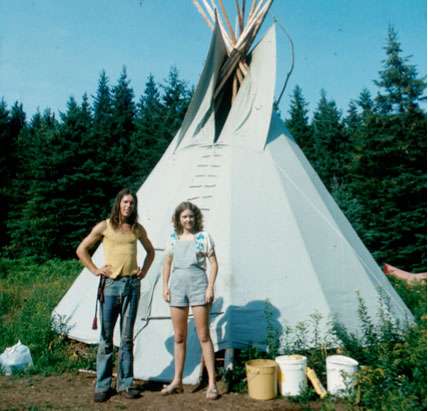 In the early 1970s, two seemingly disparate cultural phenomena took hold in Nova Scotia: Conceptual art and the back-to-the-land movement. The first aimed to be rigourously intellectual and strip sentiment and expressiveness out of art, while the second was driven by a deeply sentimental urge to establish an alternative and utopian way of life. And yet there are unexpected links between these two movements in that same time and place. Each was part of larger international developments and yet geographically isolated, relied on networked connections to the wider world, took shape under the shadow of the Vietnam war and was largely populated by Americans drawn to Canada to enact resistance and find escape. This presentation examines how these two communities, despite their very different means and strategies, ultimately shared the goal of making critiques–both implicit and explicit–of the cultural status quo.

Jayne Wark is Professor in Art History and Contemporary Culture at the Nova Scotia College of Art and Design University. She is the author of Radical Gestures: Feminism and Performance in North America (2006) and co-curator of Traffic: Conceptual Art in Canada 1965-1980 (2012). Her most recent publication is “Queering Abjection: A Lesbian, Feminist and Canadian Perspective” in Desire Change: Contemporary Feminist Art in Canada (2017). 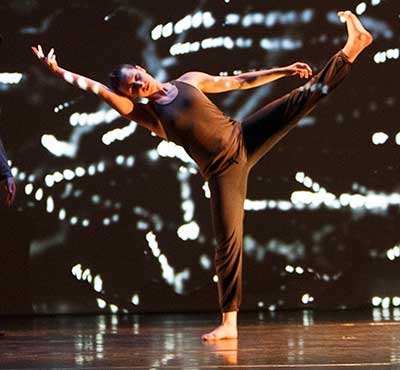 TICKETS: Pay-What-You-Can or bring a non-perishable item for the student food bank.