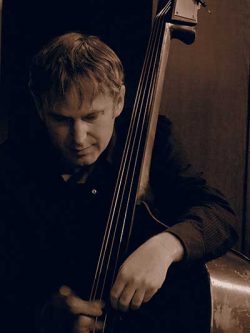 This performance will draw on modern and traditional elements of the Jazz tradition as the quartet features original works by Artie Roth from his releases as a bandleader from the albums “Parallels”, “Currently Experiencing” and “Discern”.

Toronto-born jazz bassist Artie Roth has been an active composer, bandleader, performer and educator in the national and international jazz communities, since his graduation from York University in 1992 with the Oscar Peterson Scholarship. After two Canada Council sponsored study tenures in New York City (1993 and 1997), Artie returned to Toronto establishing himself as one of the busiest, full-time composer/performers in Toronto. As a leader of his own group, Artie released “Parallels” in 2005, “Currently Experiencing” in 2013, and most recently “Discern” in 2015. As well as leading his own group, Artie is also an active member of The Rich Underhill Group, The Bob Brough Quartet, Kollage and The Jazz Collective.

From beginnings recording and co-writing in the late eighties alternative music scene in Toronto, Artie debuted as a Jazz composer with the ballad “Mountain”, recorded and performed with legendary Jazz Flugelhornist Kenny Wheeler, on The Greg Runions Sextet 1994 CD release “But Not Forgotten”. Artie’s three CDs as leader, namely “Parallels” (2005) “Currently Experiencing” (2013) and “Discern” (2015) exclusively showcase his range as a composer, with eight self-penned works per recording. As the bassist for Kollage, Artie was commissioned by legendary drummer Archie Alleyne to write two Jazz trio compositions, “The Other Foot” and “The Wrong Foot”, which he recorded with Alleyne and internationally renowned pianist Robi Botos on Kollage’s 2009 CD release “The Rhythm” . Works from “Parallels” and “Currently Experiencing” have been scored and arranged for The Bob Brough Quartet, The Jazz Collective, Kollage and The Rich Underhill Group. Additionally, these arrangements have been incorporated into the post-secondary educational repetoire/curriculum of numerous student Jazz Ensembles and composition courses at York University, The University of Toronto and Humber College

As a side-person, he has been recorded on over 50 CDs including Rich Underhill’s 2003 JUNO award winning Tales from the blue lounge and 2007 JUNO nominated Kensington Suite, Sophie Milman’s JUNO nominated debut CD and Rockit 88’s 2004 JUNO nominated Too Much Fun. Artie has toured extensively, performing in theatres, festivals and jazz venues regionally, nationally and internationally. More specifically, on a national level, this touring has included dates on the east coast with The Artie Roth Quartet(2015), with jazz vocalist Melissa Stylianou, the east coast (2001), Quebec (2003) and Manitoba (2005) and with Jazz legends Curtis Fuller and Marcus Belgrave in Ontario(2005). Additionally, Artie has been on cross-Canada tours with The Sean Bray Quartet (1995), The Rez Abassi Quartet (2000) and The Rich Underhill Group (2010). Internationally, tours in the U.S.A. have included performances with The Greg Runions Sextet featuring Kenny Wheeler (1994) and The Lynne Arriale Trio (1997).