the morning I died I flew over the tobacco fields…

On March 28, The Centre for Imaginative Ethnography (CIE) in partnership with the Graduate Program in Theatre and Performance Studies and Sensorium: Centre for Digitial Arts and Technology at York University will present the world premiere of the morning I died I flew over the tobacco fields…, an adaptation of a short story written by Toronto’s Lynn Hutchison Lee, daughter of a Canadian mother and Romanichal (English Romani) father.

the morning I died I flew over the tobacco fields…is inspired by the life of Lynn’s paternal aunt May and takes place during the latter part of the Depression in the Tillsonburg area (Southwestern Ontario). The performance project uses multimodal ethnographic approaches, including physical theatre, film, photography, spoken/written word to tell the story of family, identity and absence. “The story is based on my family’s history; it is the story of my aunt. I wanted to bring life to this young girl, to humanize her. My aunt May was a recluse and she came from a poor, illiterate family who was separated and scattered. There are stereotypes about the Romani people, and I wanted to dispel some of these biases about my father’s people.”

How does one do an ethnography about a non-living person? This is the main question for the creative team of the ethnographic performance, helmed by professor and stage director Magdalena Kazubowski- Houston who has extensive experience working with Romani people in Poland.

Production Synopsis: May climbs onto a roof being tarred by her father and brothers and is enchanted by the sight of two swans on a pond owned by the wealthy tobacco farmer for whom her family works. She is hired as a paid companion for the farmer’s wife, Missus Quince, and is assigned the task of preparing food for the swans. Over the years, May finds comfort in her visions of the two swans on the pond who often ‘visit’ her at night, and eventually becomes a healer of birds.

Artistic Collaborators
Alison Blair – project assistant, props, costumes and publicity
Alison is a Toronto-based emerging artist and arts educator currently pursing her Master of Arts in Theatre and Performance Studies at York University. Her arts creation and research interests focus on wellness and embodied educational practices in secondary schools. After graduating from University of Toronto and Sheridan College (Theatre and Drama Studies) in 2012, Alison discovered a love for fitness and the wellness of performers which led her on a path to a career in the fitness industry and ultimately in education. She studied the practice of teaching Drama under Kathleen Gould-Lundy at York University and hopes that through performance creation, she can continue the work she does in classrooms by teaching through movement and the arts.

Becky Gold – assistant director, co-editor, field notes blog
Becky is a community arts facilitator, artist support worker, and emerging scholar currently pursuing her PhD in Theatre and Performance Studies at York University. She holds a BA Honours in Drama and English from Queen’s University and a MA in Theatre Studies from the University of British Columbia. Becky’s research interests include: disability theatre, interdependence and care politics in performance, performance ethnography, and imagining futures of disability through performance.

Leanne Hoffman – performer
Leanne is an actor and writer based in Toronto, Canada. Originally from Medicine Hat Alberta, she moved to Toronto to attend the theatre program at York University. After completing the acting conservatory program, she currently resides in the city to share in the multitude of opportunities Toronto provides. You can catch Leanne indoors on a rainy day, rereading old favorite books, or listening to music her parents had hoped she’d grow out of.

Lynn Hutchinson Lee – playwright, dramaturgy
Lynn is a multimedia artist from Toronto, Canada and is a co-founder of Red Tree and chirikli collectives. Her work has been exhibited in Canada and Latin America. chirikli’s sound installation Canada Without Shadows was exhibited at Call the Witness, Second Roma Pavilion, Venice Biennale; BAK, Utrecht, Netherlands; and National Museum of Contemporary Art, Bucharest, Romania. Five Songs for Daddy, Lynn’s spoken word piece from Canada Without Shadows, was installed at the Art Gallery of York University’s Audio Out, Toronto. Her selected writing is included in The Food of My People (forthcoming, edited by Ursula Pflug and Candas Jane Dorsey, Exile Editions); CLI-FI: Canadian Tales of Climate Change(edited by Bruce Meyer, Exile Editions); Romani Women in Canada: Spectrum of the Blue Water (Inanna
Publications); Romani Folio (Drunken Boat International Journal of Literature and the Arts), and other publications.

Magdalena Kazubowski-Houston – co-director, lead ethnographer
Magdalena is an anthropologist, performance theorist, theatre director and playwright. She is Associate Professor of Theatre, and has graduate appointments in Theatre & Performance Studies and Social Anthropology at York University. Her research interests include performance ethnography, ethnographic storytelling, ethnographic (non)fiction, multimodal ethnography, physical and political theatre and performance. She has collaborated on imaginative ethnography projects with Romani people and Nazi-Holocaust survivors in Poland and Canada, and residents from Vancouver’s Downtown Eastside. Her book, Staging Strife (2010), was awarded the International Congress of Qualitative Inquiry Outstanding Qualitative Book Award and the Canadian Association for Theatre Research Ann Saddlemyer Book Prize (2011). Her article, “quiet Theatre: The Radical Politics of Silence,” was awarded the Canadian Association for Theatre Research (CATR) 2019 Richard Plant Prize, granted annually to the best English-language article on a Canadian theatre or performance topic. She is a Co-Curator of the Centre for Imaginative Ethnography (CIE).

Shawn Kazubowski-Houston – co-director, co-editor
Shawn is a thespian, theatre director, playwright, photographer, editor and poet. He has worked as ethnographer and co-artistic director (Teatr Korzenie) on various projects in Toronto, Vancouver, Winnipeg and Poland. Shawn is also the events and media coordinator at Emmanuel College of Victoria University in the University of Toronto.

Rajat Nayyar – co-editor, audiovisual ethnographer and filmmaker
Rajat Nayyar is an anthropologist and a filmmaker with an MA in Audiovisual Ethnography from Tallinn University. His recent film ‘Kashi Labh’ was screened at RAI film festival and numerous other anthropological film festivals and conferences. He is currently pursuing a PhD in Theatre and Performance Studies at York University, where his focus is on vocal traditions, everyday acts of resistance, collaborative fiction filmmaking and futures anthropology. Rajat is the founder of Espírito Kashi, a project that facilitates performative spaces for rural Indian communities to critically re-imagine folklore, decolonize archives and film futures. He also co-edits the ‘Performance Ethnography’ section of Centre for Imaginative Ethnography, a transnational research-creation network.

Marilo Nuñez – stage manager, project assistant, props, costumes and publicity
Marilo Nuñez is a Chilean-Canadian playwright and director. She was the 2018 recipient of the Hamilton Arts Awards for Established Theatre Artist and was recently nominated for the Johanna Metcalf Performing Arts Prize. She is the recipient of the prestigious Graduate Fellowship for Academic Distinction and the Susan Crocker and John Hunkin Scholarship in the Fine Arts among countless other grants and scholarships. Currently a member of Natural Resources, Factory Theatre’s playwright’s unit for established writers, she has been a member of playwright’s units at Tarragon Theatre, Theatre Aquarius, Cahoots Theatre Company, Nightwood Theatre and Alameda Theatre Company. She was Playwright-in-Residence at Aluna Theatre in 2016 and was McMaster University’s first Playwright-in-Residence in 2018. She was founding Artistic Director of Alameda Theatre Company, a company dedicated to developing the new work of Latinx Canadian playwrights. She is a graduate of Ryerson Theatre School, has an MFA in Creative Writing from University of Guelph and is currently obtaining her Ph D. in Theatre & Performance Studies where her research will focus on race and racism in Canadian theatre at York University.

Marta Shpak – performer
Marta is a singer, songwriter and actress. She is an Honoured Artist of Ukraine whose international performances showcase its culture. Marta holds a Master’s Degree in Choreography from the National Academy of Leading Staff of Culture and Art of Ukraine. She has worked as a main soloist for State Ensemble of Song and Dance for the Ministry of Internal Affairs of Ukraine and recorded five musical albums with genres including folk, electro and pop. Marta has also worked as a choreographer and performer for children’s folk-ethnographic group Malenki Boiky, and is currently pursuing an MA in Theatre and Performance Studies at York University.

Sadie Wells Liddy – performer
Sadie is a full-time mover and shaker. When Sadie is not moving and shaking, she is studying at York University pursuing an undergraduate degree in both Devised Theatre and Law & Society. Sadie’s most recent work includes assistant stage managing for Shakespeare in Action’s A Midsummer Night’s Dream, as well as performing in York University’s most recent production of Vagina Monologues. 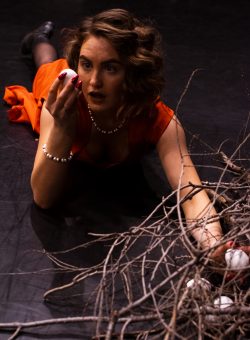 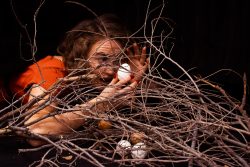